The Real Cross of Christian Life 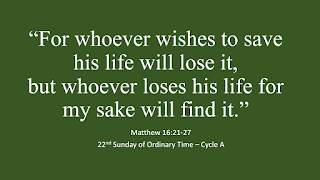 Holy Gospel of Jesus Christ according to Saint Matthew 16:21-27.
Jesus began to show his disciples
that he must go to Jerusalem and suffer greatly
from the elders, the chief priests, and the scribes,
and be killed and on the third day be raised.
Then Peter took Jesus aside and began to rebuke him,
“God forbid, Lord! No such thing shall ever happen to you.”
He turned and said to Peter,
“Get behind me, Satan! You are an obstacle to me.
You are thinking not as God does, but as human beings do.”

Then Jesus said to his disciples,
“Whoever wishes to come after me must deny himself,
take up his cross, and follow me.
For whoever wishes to save his life will lose it,
but whoever loses his life for my sake will find it.
What profit would there be for one to gain the whole world
and forfeit his life?
Or what can one give in exchange for his life?
For the Son of Man will come with his angels in his Father’s glory,
and then he will repay all according to his conduct.”

Reflection
The image of the cross has always meant suffering. Opponents have derided us Christians as Masochists for preaching the cross. It is indeed foolish for anyone who lacks faith in it. For Christ we have become fools but among us who believe the cross is the instrument of salvation.

The cross is the symbol of Christ’s obedience through which we were saved. Against the natural instinct of self-preservation, Jesus chose to lay down His life on the cross. And thus it became for us a sign of salvation. Like Jesus we have to carry our daily crosses if only to learn Christ’s obedience and make it our own.

The Prophet Jeremiah points to the inner motive for the cross. The Word of God that burned in the prophets heart overruled his very life. He rightly complained, “you have duped me, Lord!” So it was with Jesus who chose to face the suffering of the cross against Peter’s protest. That love for the Word and Will of the Father did not overrule His life but ruled everything that He is, did, and said.

In Jesus is a different kind of cross. In His heart weighs a love for the Father that burns from within wishing to consume everything that it touches. It is that love that impels Him to go beyond. It is the very soul of His life.