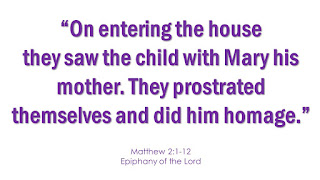 Holy Gospel of Jesus Christ according to Saint Matthew 2:1-12.
When Jesus was born in Bethlehem of Judea,
in the days of King Herod,
behold, magi from the east arrived in Jerusalem, saying,
“Where is the newborn king of the Jews?
We saw his star at its rising
and have come to do him homage.”
When King Herod heard this,
he was greatly troubled,
and all Jerusalem with him.
Assembling all the chief priests and the scribes of the people,
He inquired of them where the Christ was to be born.
They said to him, “In Bethlehem of Judea,
for thus it has been written through the prophet:
And you, Bethlehem, land of Judah,
are by no means least among the rulers of Judah;
since from you shall come a ruler,
who is to shepherd my people Israel.”
Then Herod called the magi secretly
and ascertained from them the time of the star’s appearance.
He sent them to Bethlehem and said,
“Go and search diligently for the child.
When you have found him, bring me word,
that I too may go and do him homage.”
After their audience with the king they set out.
And behold, the star that they had seen at its rising preceded them,
until it came and stopped over the place where the child was.
They were overjoyed at seeing the star,
and on entering the house
they saw the child with Mary his mother.
They prostrated themselves and did him homage.
Then they opened their treasures
and offered him gifts of gold, frankincense, and myrrh.
And having been warned in a dream not to return to Herod,
they departed for their country by another way.

Can you remember the feeling of unboxing your first gadget? Unboxing has become a fad with so many videos on YouTube showing the process of removing the gadget from its packaging, turning it on, and trying its new and promised features. Today’s Feast of Epiphany is the unboxing of the Mystery of God. Like when we first opened our first iPhone from its box, Israel to whom the promise of Salvation has been given is excited to unbox its gift. To the surprise of many, when many expected power and strength, the baby Jesus was revealed as the Savior of Israel. To the further surprise of many, Magi from the East travelled and came all the way to worship Him.

That is what Epiphany is all about. It is the revelation that the unseen God is now seen, the promised light has magnificently exploded in brilliance, not only to Israel but to the whole of humanity, to the whole world, in the Baby Jesus. God overturns expectations. He came not as the invincible and glorious Being that He is, but as the vulnerable and fragile baby of Mary. He offered His love, not only to Israel but allowed the star to shine over all the land, for all people to see. The magi from the east were but stand-ins for us. Even in His birth, Jesus Christ has been welcoming everyone to Himself. It didn’t matter that they were not Jews, they were not from Jerusalem, they were not sons of Abraham. What mattered is that they were invited by the star and they heeded the invitation.

With the recent Christmas celebration, many of us received gifts handsomely packed and stacked under the Christmas tree. We still feel excitement receiving and opening these. But the greatest gift we have received is the incarnate Son, the baby in Bethlehem in the arms of His mother Mary. Now He has unboxed and revealed Himself for us. Come let us worship.