Contributing What We Value 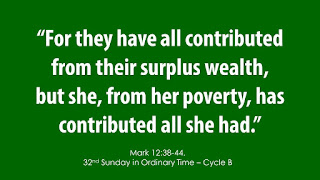 Holy Gospel of Jesus Christ according to Saint Mark 12:38-44.

In the course of his teaching Jesus said to the crowds,
“Beware of the scribes, who like to go around in long robes
and accept greetings in the marketplaces,
seats of honor in synagogues,
and places of honor at banquets.
They devour the houses of widows and, as a pretext
recite lengthy prayers.
They will receive a very severe condemnation.”

He sat down opposite the treasury
and observed how the crowd put money into the treasury.
Many rich people put in large sums.
A poor widow also came and put in two small coins worth a few cents.
Calling his disciples to himself, he said to them,
“Amen, I say to you, this poor widow put in more
than all the other contributors to the treasury.
For they have all contributed from their surplus wealth,
but she, from her poverty, has contributed all she had,
her whole livelihood.”

The contrast between the widow and the rich people tells us that God looks at the proportion of our generosity. We can choose to be generous but too often our generosity have limits. We run into the temptation of giving only what comfort allows. Jesus made the poor widow the standard of generosity. She gave even in her poverty and she gave everything she had.

The scribes, those well-versed in the scriptures in Jesus time, is the Gospel reading’s negative example. Instead of giving, they hoard honor and riches. This opposition and contrast reminds us of the generosity expected of a Christian. We go through life not hoarding but giving. We are not to give from our surplus. We are to give from what we value.

The widow impressed Jesus because she mirrored what Jesus would do on the cross. He gave everything He had. As disciples of Christ, we are all spiritually poor by ourselves and Jesus invites us to drop in our last two small coins. What do we value most that we still need to give to the Lord?