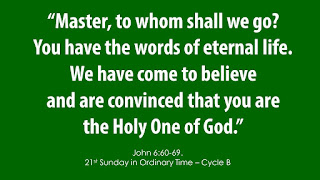 Holy Gospel of Jesus Christ according to Saint John 6:60-69.
Many of Jesus’ disciples who were listening said,
“This saying is hard; who can accept it?”
Since Jesus knew that his disciples were murmuring about this,
he said to them, “Does this shock you?
What if you were to see the Son of Man ascending
to where he was before?
It is the spirit that gives life,
while the flesh is of no avail.
The words I have spoken to you are Spirit and life.
But there are some of you who do not believe.”
Jesus knew from the beginning the ones who would not believe
and the one who would betray him.
And he said,
“For this reason I have told you that no one can come to me
unless it is granted him by my Father.”

As a result of this,
many of his disciples returned to their former way of life
and no longer accompanied him.
Jesus then said to the Twelve, “Do you also want to leave?”
Simon Peter answered him, “Master, to whom shall we go?
You have the words of eternal life.
We have come to believe
and are convinced that you are the Holy One of God.”
—

As a result of Jesus’ teaching, many of his disciples left Him. They were drawn to Jesus because of the power of His words and the many signs and miracles that He worked. The recent teaching however was a challenge: one has to consume Jesus’ flesh and blood in order to have eternal life. Not only was it against the Jews’ religious sensitivities, it was also a call to cannibalism most, if not all, cultures would reject.

The invitation of Jesus was not symbolic. It is graphic and disturbing, something that challenges one’s worldview. For those who rejected the invitation, they returned to their former way of life. For them, Jesus was just a fad who turned out to be too strong to the taste. The evangelist John directs us however to the honest and sincere response of Peter: “Master, to whom shall we go? You have the words of eternal life.”

The twelve stood out from the disciples as those who chose to stay. Jesus forced them to face their own position, “do you also want to leave?” They were however taken up by their conviction, in their faith, to stay. They have seen and experienced for themselves the mystery of the person of Jesus and they were ready to take His challenge. They have left everything and they have followed only Him. Our Christian faith requires that strong conviction in Jesus.