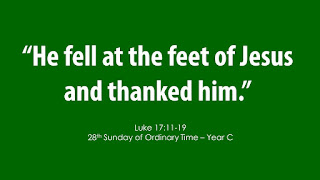 Holy Gospel of Jesus Christ according to Saint Luke 17:11-19.
As Jesus continued his journey to Jerusalem, he traveled through Samaria and Galilee.
As he was entering a village, ten lepers met him. They stood at a distance from him
and raised their voice, saying, “Jesus, Master! Have pity on us!”
And when he saw them, he said, “Go show yourselves to the priests.” As they were going they were cleansed.
And one of them, realizing he had been healed, returned, glorifying God in a loud voice;
and he fell at the feet of Jesus and thanked him. He was a Samaritan.
Jesus said in reply, “Ten were cleansed, were they not? Where are the other nine?
Has none but this foreigner returned to give thanks to God?”
Then he said to him, “Stand up and go; your faith has saved you.”
Reflection
An article from The Standard was published recently asking the all too-familiar question, “Are millennials so full of themselves?” It is a public secret that we live in a narcissistic time captured in the selfie phenomenon. Call it the tide of post modernity but the truth is, this is the very atmosphere we all breathe in day in and day out whether you like it or not. We all speak in reference to ourselves. Give everyone some inconvenience and you will hear complaints about rights and privilege.

An excess of self-love blinds us to the grace that has always permeated our lives. Despite the high standard of living in developed countries the incidence of depression is very high. We are too concerned with a little drizzle we totally forget about the sun. Today, we are in need of a sense of gratefulness.

Someone approached me and complained about his problems in life. There’s just too much to take in, he claimed. For him, it felt like the world was on his shoulders so much so that his weariness turned to despair and he began to question even the existence of God. I listened to him. All the while at the back of my mind I saw myself in him. I too complain about everything big and small. There are simply so many things to complain about in life. But I remembered one advice I got from my spiritual director which I also shared with the guy. “Every night, before you go to sleep, think of three things that happened to you during the day that you can be grateful of,” I told him. It is the same exercise I do to combat incessant complaints.

The Gospel reading is striking for it highlights a very small proportion. In ten, only one came back to give thanks for the cure. To situate ourselves, leprosy during the time of Jesus is an incurable disease that brings with it social stigma. To be a leper means to be exiled from the community and to die a slow and shameful death. It is striking then that after being healed only one in ten came back to give thanks.

To mention that the person was a Samaritan is all the more striking. The people of Israel had a habit of singing in jubilation after being saved. They sang praises after Israel crossed the Red sea in their escape from the Egyptians. They sang when David returned to Jerusalem after his defeat of the Philistines. They sang whenever they could say that “the LORD has visited his people” (cf. Luke 7:16).  But this time, among the ten, only the foreigner, the non-Jew, came back to give thanks.

The episode is a reflection of how much we can miss out on the graces that we receive everyday. Perhaps of the ten good things that happened to us, we only notice one (that is if we notice at all), all the while complaining about the rest of day. We are too engrossed in the small inconveniences of life or too preoccupied about our “big” problems that we oftentimes forget how big our God is. We sometimes fail to see the graces that God has sprinkled throughout our day that has the potential to be life-changing for us.

Take for example the Eucharist that we celebrate and receive every Mass. We believe that in that piece of bread is the real body of Christ that we receive with our hands and tongue. It is Jesus, the Word-made-flesh, that we are holding in our hands and chewing in our mouths. We have in our hands the God who made the whole universe. But these detail leaves us. It has happened before as it is happening now; it is something so common that we do not really appreciate the value of the real treasure that we receive at communion. Yet saints have been made because of the Eucharist.

“Eucharist” is Greek for Thanksgiving. The Holy Mass is a thanksgiving of the Church to the Father for all the graces and love that she received. As Christians, we are a grateful people. We are grateful for Jesus. We are grateful for the Spirit. Gratefulness is a clear sign of faith. That is why Jesus praised the Samaritan for his act of gratitude. He was able to realize the cure has happened and felt grateful about it. Gratefulness consists in humility that stems from receiving an undeserved gift of grace. That is why he fell at Jesus feet. He recognized the immensity of God in Jesus. If we allow grace to work in us, it transforms us to become grateful and humble people. It is then that we are saved.

The challenge for Catholics today is to live that Eucharistic existence. That is, to see the imprints of God throughout the day, to be sensitive to His grace. Mystics call it contemplation. Yes, we need to contemplate now more than ever the presence of God in our lives and allow His grace to transform us. That like the Israelites of old and like the Blessed Mother, we can also sing in humble recognition of our littleness before the immensity of God. We become a thankful people. We become a Eucharistic people.