Footprints of the Messiah 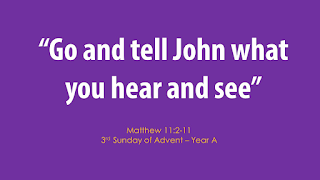 Third Sunday of Advent – Year A

Holy Gospel of Jesus Christ according to Saint Matthew 11:2-11.
When John the Baptist heard in prison of the works of the Christ, he sent his disciples to Jesus
with this question, “Are you the one who is to come, or should we look for another?”
Jesus said to them in reply, “Go and tell John what you hear and see:
the blind regain their sight, the lame walk, lepers are cleansed, the deaf hear, the dead are raised, and the poor have the good news proclaimed to them.
And blessed is the one who takes no offense at me.”
As they were going off, Jesus began to speak to the crowds about John, “What did you go out to the desert to see? A reed swayed by the wind?
Then what did you go out to see? Someone dressed in fine clothing? Those who wear fine clothing are in royal palaces.
Then why did you go out? To see a prophet? Yes, I tell you, and more than a prophet.
This is the one about whom it is written: ‘Behold, I am sending my messenger ahead of you; he will prepare your way before you.’
Amen, I say to you, among those born of women there has been none greater than John the Baptist; yet the least in the kingdom of heaven is greater than he.

Reflection
We live in a world that needs guarantees. Banks won’t approve of loans without a collateral. Credit companies won’t issue you a credit card without good credit standing. Math teachers won’t consider your answer without a solution. A fact is scientifically sound if it is demonstrable, repeatable, and tested. News is truth if it comes from a verifiable source. It is human to ask for a guarantee for truth.

John the Baptism was your ordinary human. He was like Facebook asking for your password as you log-in or Gmail when asking for a two-factor authentication code as you check your email or Android asking for you PIN, or iPhone waiting for your fingerprint. He was curious if Jesus was the real long-awaited Messiah.

If you remember, in Genesis, God promised Adam and Eve that he would send a savior. In Isaiah, he promised to send a Suffering Servant. Among the prophets, a new Moses. Throughout the Old Testament is a string of promises of Salvation and the people of Israel for thousands of years have been waiting for the one. In their tongue, they call him מָשִׁיחַ (mashiach) or the ‘anointed one’ which is anglicized as Messiah. In Greek it is christos. He would bring with him peace, harmony and joy for Israel and the whole world.

When Jesus appeared on the public scene and gaining a name for himself, John heard about him. John wanted to confirm if Jesus was indeed the one. “Are you the one who is to come, or should we look for another?” They have been looking for so long. Many have come forward as the savior but all of them have failed expectations. This Jesus was proclaiming the coming of the Kingdom of God. He shares the same preaching as John, repent! Is he the fulfillment of the Old Testament promises?

To this Jesus replied: “Go and tell John what you hear and see: the blind regain their sight, the lame walk, lepers are cleansed, the deaf hear, the dead are raised, and the poor have the good news proclaimed to them.” These are the footprints that mark that the Messiah has walked the earth. Jesus alludes to the messianic promises of Isaiah 35. For the anointed of the Lord is anointed with the Spirit and with Him comes not only miracles but the sense of joy, peace, and harmony. And he commends John the Baptist as being that voice that prepared for Jesus coming.

Jesus however declares that even the least in the Kingdom is greater than John. Why? Because those in the Kingdom of God has already seen the promises fulfilled in Jesus, something that John longed to see, something that the prophets of old could only dream of. We who have received Jesus’ baptism of water and Spirit have received the fullness of God’s promises especially when we receive communion in the Holy Mass.

As we await the second coming of the Christ, we are on the mission to make visible the fruits of these promises. As Christians, we are called to build a society of joy, peace, and harmony; of contributing to growth in humanity, of promoting life and justice. Because the Christ of God has been united to us and is now living in us and working in us. Like Jesus we also have received the anointing of the Spirit in which we are empowered to so that we can also go to the John the Baptists in our lives what we have heard and seen in Christ. This should be the Advent preparation we should do as we move towards Christmas.

Jesus Christ continues to walk the earth through us. We are the footprints of the Messiah.