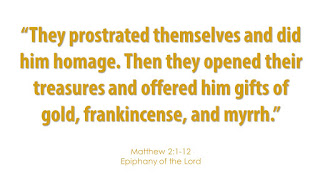 Holy Gospel of Jesus Christ according to Saint Matthew 2:1-12.

When Jesus was born in Bethlehem of Judea,
in the days of King Herod,
behold, magi from the east arrived in Jerusalem, saying,
“Where is the newborn king of the Jews?
We saw his star at its rising
and have come to do him homage.”
When King Herod heard this,
he was greatly troubled,
and all Jerusalem with him.
Assembling all the chief priests and the scribes of the people,
He inquired of them where the Christ was to be born.
They said to him, “In Bethlehem of Judea,
for thus it has been written through the prophet:
And you, Bethlehem, land of Judah,
are by no means least among the rulers of Judah;
since from you shall come a ruler,
who is to shepherd my people Israel.”
Then Herod called the magi secretly
and ascertained from them the time of the star’s appearance.
He sent them to Bethlehem and said,
“Go and search diligently for the child.
When you have found him, bring me word,
that I too may go and do him homage.”
After their audience with the king they set out.
And behold, the star that they had seen at its rising preceded them,
until it came and stopped over the place where the child was.
They were overjoyed at seeing the star,
and on entering the house
they saw the child with Mary his mother.
They prostrated themselves and did him homage.
Then they opened their treasures
and offered him gifts of gold, frankincense, and myrrh.
And having been warned in a dream not to return to Herod,
they departed for their country by another way.

The Epiphany of the Lord presents to us Jesus as the full manifestation of God. Being God-in-the-flesh, Jesus is the most tangible and accessible presence of God. Not only does He manifests Himself to the chosen people of Israel, but by Matthew’s use of Old Testament images, led the three magi to Himself through a celestial sign of the star. Each magi representing a race known to ancient Israel, to tell us that Jesus is not only for the Jews but for all humanity.

This universalism in the Gospel speaks of how the mercy of God includes everyone. God invites every human person to Himself regardless of color or race or religion. God wants to save everyone. However, as the Gospel unravels the story, not everyone accepts the invitation with joy. Herod, insecure of the birth of the King, is filled with evil intent. The chief priests and the scribes who understood the signs and the scriptures, did not go out to search for the King.

It was the magi whom the star has invited and has heeded the call who risked all in a journey to search for Him. And when they found Him, they gave Him not only gifts fit for the King of Heaven, but above all fell before Him in adoration. They saw not only a baby, not only a King, but God in the flesh. When God has moved the heavens, and sprinkled signs and messengers through events and people in our lives, how do we heed His invitation? Will we reject it like Herod or remain indifferent like the religious leaders? Or will we like the magi, risk all to receive God’s manifestation in Christ?