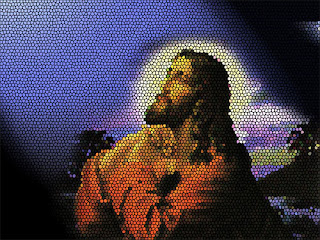 It had been a long day yesterday. His body felt tired but his spirit was brimming with the energy he too seeks to understand. It is pushing him forward although he does not know exactly towards where but he is sure for himself he is being called to do something.

It is strange. Being so sure but being so vague about it. It’s as if it’s already in the palm of your hands but you can’t feel its texture yet. You can’t even grasp it in your fingers and hold on tightly to it though you are sure you can and you will. It’s not confusion but it is a disturbance deep inside you that just keep pestering your thoughts not allowing it to settle in a pool of calm. There is an upward movement, an active search for something you are sure you must know but not yet.

So, Jesus hid himself away from the crowd that had been surrounding him. Though he felt he belonged in their midst and felt fulfilled in ministering to them, the chirp of the crickets remind him that it is not yet the time. There us something he must do first before any other. He felt thirst.

It was not a physical thirst from the Mediterranean sun scorching everyones lips. It was a cool and silent early morning. The birds still asleep and so was the sun. Yet, he is uneasy and feels a pull towards somewhere and someone. It is a deeper kind of thirst for someone and he knew he had to be alone.

He got up from where he slept and silently walked away into the shadows disappearing from sight. And when he was alone he prayed. He closed his eyes and entered his inner abode. In the cover of darkness, Light met Light and no human eye has seen such wonder.

Peter awoke first. Unlike many mornings that had gone, he woke up with his heart pumping in his chest. It could have been just a dream but the faces and the murmur of those around him brings such dreams back to reality. It was real. It happened in time and space. A new prophet had arisen and he has been working wonders.

Except that this new prophet is strange. There is something odd about him. He exudes power in word and deed, a kind of power that bends one’s knees. But such power is not subduing. Rather it is like a smooth flow of energy that invigorates the insides. Such power empowers.

Peter has not felt anything like it. He wanted to experience it more. He was searching for it. His heart was restless. Footsteps beat with his heart and he saw his friends coming. Their faces covered with worry just like the time when they lost their toy boat to the lake’s current a long time ago. No, it was much more. There was tinge of sadness in their eyes, in the beads of tears at the corners, speaking of uneasiness at the thought that a treat has been taken away from them.

“He has disappeared,” they reported to Peter. “They could not find him anywhere. Nobody saw him go.”

These guys grew up with him and Peter is slightly amused at their helplessness. They already have families and children of their own, but it felt like they were young once more. He could feel his veins expand in excitement just like the time they had to search for some lost animal in the hills. He had been a hunter too but this time the game’s much bigger.

He quickly got up to his feet, put on his cloak. He felt young again. He felt charged. “He cannot be faraway.”

It was an unusual sound. The sun had just risen but the town seems to be in hush-hush. Something has happened. Someone has happened there. Peter and his companions took to the hills. They have grown worried. They could not find him still. They have followed the usual paths but there was no sight of him.

Why would he leave the village like that? Did he not see the amazement people had on their faces at the wonders he had done? They could have a messiah at last!

They stopped at their tracks. It was stupid enough to stray from the paved road to where there might be danger behind the end. Wild animals have been known to attack the villagers here. But when they saw him there, bent in total silence, his face full of peace, they realized they have entered a holy ground.

In this wayward part of town, a place seldom visited by people except for an occasional group of young men seeking adventure, Jesus is seen kneeling. The world just stops around him. Even the sycamore tree stooped to hear better the silence emanating from Jesus. It was an unmistakable peace and the world is struck at the sight.

The worries they were bringing along faded when Peter found him there. A few seconds after their feet stepped into that small circle, Jesus opened his eyes. He looked at them and smiled. They didn’t know what to say an how to begin it.”

“Everyone is searching for you.” Peter was sure they were the only group who left looking for him.

“Let us go to neighboring towns, so that I may proclaim the message there also; for that is what I came out to do.”

This man is unusual! He seems to be so sure of himself. It’s as if he just finished meeting his advisors. He spoke with real certainty.

His companions looked at Peter. Were they to go? Are they also willing to leave their village? They haven’t even said their goodbyes, nor have their food packed. Peter, the leader of that gang, nodded at them. He was sure that this man was sure. They can all place their bet on him. He will work wonders just as he had before. If he comes to be the messiah, then they have struck gold.

Jesus took to the roads again together with the group. They visited towns and saw much wonder worked everywhere. Yet in Peter grew a little disturbance, a curious search of where this new prophet finds his strength. But this is yet to be revealed to him.