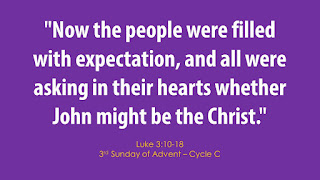 Holy Gospel of Jesus Christ according to Saint Luke 3:10-18.

The crowds asked John the Baptist,
“What should we do?”
He said to them in reply,
“Whoever has two cloaks
should share with the person who has none.
And whoever has food should do likewise.”
Even tax collectors came to be baptized and they said to him,
“Teacher, what should we do?”
He answered them,
“Stop collecting more than what is prescribed.”
Soldiers also asked him,
“And what is it that we should do?”
He told them,
“Do not practice extortion,
do not falsely accuse anyone,
and be satisfied with your wages.”

Now the people were filled with expectation,
and all were asking in their hearts
whether John might be the Christ.
John answered them all, saying,
“I am baptizing you with water,
but one mightier than I is coming.
I am not worthy to loosen the thongs of his sandals.
He will baptize you with the Holy Spirit and fire.
His winnowing fan is in his hand to clear his threshing floor
and to gather the wheat into his barn,
but the chaff he will burn with unquenchable fire.”
Exhorting them in many other ways,
he preached good news to the people.

John the Baptist should be the patron of those who call themselves “social media influencers” today. He knew how to make things viral. He built up a hype around the Christ. He knew how to get his message across and people were wanting for more.

But he was also exacting. He upheld the morality expected from every good Jew. And he was also humble. He denied that he is the Christ and admitted the lack of his ministry. For this he was faithful to his mission. His mission was to exhort everyone and to introduce them to the good news of salvation.

Advent is also about us listening to our John the Baptist’s and becoming John the Baptist to others. Not everyone has the talent, the looks, or the resources to become a social media influencer today. But everyone baptized has not only been baptized with water but also the Spirit. It is the Spirit that sets us afire and makes us level our expectation of the Christ. Let us allow the Spirit of Advent to raise us up to the expectations of Christ and lead others to do the same.