LIGHT AND SHADOW OF VIENNA

I am now in Vienna, Austria for already over a month. After having given my nuptial blessing to my parents who celebrated their ruby wedding anniversary, and after having baptized my brother’s daughter, Gwyneth, I also took time to visit and appreciate the Austrian scenery.

Vienna is a very impressive city steeped in tradition and style. Here the old and the new blend in a fascinating mixture. As one stands on the façade of St. Stephan’s Cathedral on the First District or walk on the gardens of the palace of Schonbrunn, one senses the remarkable artistry and fine architecture that once dominated this city that gave it its stature as one of the most important places in Europe. I have observed two remarkable things while I went around: its cleanliness and organization.
Wherever one goes, Austria is characterized by its beauty and cleanliness. Even its countryside is still untouched by pollution and contains the aura of freshness. I came during election peri 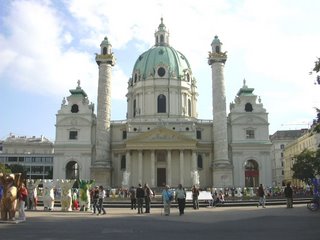 od when different political organizations are vying for a post in Vienna’s parliament. Yet the city remains unscathed by irresponsible posters and ads of any political group. Furthermore, the city’s organization is admirable. Its buildings, roads and railways are well planned. Transportation is very convenient. One could buy a ticket that could be used for the bus, train, tram or the underground metro. The roads of the city are wide and well-lighted. Pedestrians and bicycle riders are prioritized because there is really a specific lane for them. There are no traffics in Vienna.
People live very comfortably. There are no poor in this country since there is a very strong government support for society’s needs. Though taxes are quite high, about 20% of one’s salary, yet people don’t mind because they enjoy them. Education and hospitalization are free. The government has a very good social service system. In fact those who bear children have two years maternity or paternity leave with government support for the child. Indeed, people here enjoy the good life.
However, Vienna is not heaven yet. There is another side of the city’s face. Here, people seem not to believe in God anymore. Religion is cold. Spirituality is lacking because perhaps people have everything they need. Even prayer is no longer a need and materialism is strong. When one enters the church for Sunday services, only the old people are present perhaps to atone for the sins of their youth. The young are far from the Church. Austria is characterized by a very liberated stance on sexuality. There is free love even for young people. Sex advertisement can be seen on TV. Sex shops are all over the city. Though Vienna has a population of 8.5 M, 2 M are senior citizens. Like all the other European cities, Vienna has a zero percent population growth. More people die than children being born.
I visited a bookstore once in the First District. A few meters away, I noticed several persons distributing pamphlets. I learned that they were membe 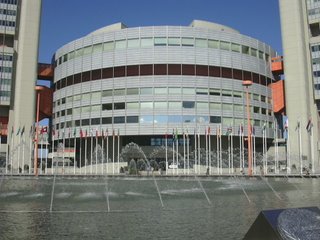 rs of the Human Life International praying and protesting to stop abortion in Austria. I saw a door leading to a building which is said to be the biggest abortion clinic in the country. In the last 10 years, it has aborted almost a million babies. Beside the door is a woman wearing an anti-abortion placard while she prays the rosary and holds a miniature image of an aborted baby. They have been fighting and struggling against this evil for the last 8 years. They have a little office around the corner which has a counseling room and a small chapel where at least 2 volunteers pray daily before the Blessed Sacrament. An icon of the Holy Family is prominently place in front as a reminder of the importance of the family.
What they do is very inspiring. Though they have little success, they keep the struggle every single day even during winter. They explained that the number of abortion has decreased. Before their advocacy, there were about 12-15 abortions everyday. Today, there are about 6-8 abortions per day. The clinic itself has suffered financially. It used to occupy 3 floors of the building. Now it is left with only one floor.
Austria may be a very cultural and artistic city but it has also a façade that is not so beautiful. In living the good life, some people forget the purpose and meaning of why we live. In their desire to enjoy the best of what life can give, some people forget the spiritual side of man that can never be extinguished. The thirst, though, continues to persist for only God can fully quench it.