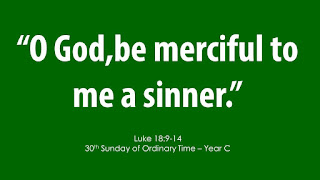 Holy Gospel of Jesus Christ according to Saint Luke 18:9-14.
Jesus addressed this parable to those who were convinced of their own righteousness and despised everyone else.
“Two people went up to the temple area to pray; one was a Pharisee and the other was a tax collector.
The Pharisee took up his position and spoke this prayer to himself, ‘O God, I thank you that I am not like the rest of humanity–greedy, dishonest, adulterous–or even like this tax collector.
I fast twice a week, and I pay tithes on my whole income.’
But the tax collector stood off at a distance and would not even raise his eyes to heaven but beat his breast and prayed, ‘O God, be merciful to me a sinner.’
I tell you, the latter went home justified, not the former; for everyone who exalts himself will be humbled, and the one who humbles himself will be exalted.”
Reflection
We all have an irritation towards self-righteous people, people who love to brag about themselves, people who believe they are higher than most, people who think they’re elite. Nagbubuhat ng sariling upuan. Pagarpar ug palapad. They step on our nerves because sometimes they remind us that we too have that tendency and deep down inside they remind us that we too have pride that shouldn’t be stepped on by others. In the final analysis, their behavior and our reaction is all about human pride.

Jesus, in this Sunday’s Gospel, reminds us through the story of the Pharisee and the tax collector of what really matters in the eyes of God. God is close to those who need Him, but for those who don’t they shut Him away. The tax collector went home justified because he recognized the truth that we oftentimes forget: all of us are weak and broken, sinful and erring, and we all need God. The Pharisee shut out grace because he thought he was already perfect. In his self-deception, he shut out the Truth.

It is only when we realize how poor we are as human beings that we open ourselves to the richness of God’s grace. The realization of how little we are puts everything in perspective and it opens us to the truth of our existence. We need God. When this has already sunk into our consciousness then we become humble and the humble attract God the most.

In our society today where everything is changing fast, where everyone wants development and a better life, where everyone wants to be financially secure and live happily, let us not forget that all these things could only have value for us if we put God in the midst of these. If we want to have a good society, a God-fearing country, then we ourselves must be good. But in order to be good we must allow ourselves to be “worked upon” by God by allowing Him to fill us with His goodness. In order to be filled, we need to empty ourselves first and only then can God fill us.