Prophet even in Birth 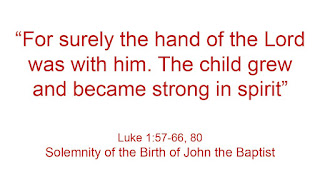 Holy Gospel of Jesus Christ according to Saint Luke 1:57-66, 80.
When the time arrived for Elizabeth to have her child
she gave birth to a son.
Her neighbors and relatives heard
that the Lord had shown his great mercy toward her,
and they rejoiced with her.
When they came on the eighth day to circumcise the child,
they were going to call him Zechariah after his father,
but his mother said in reply,
“No. He will be called John.”
But they answered her,
“There is no one among your relatives who has this name.”
So they made signs, asking his father what he wished him to be called.
He asked for a tablet and wrote, “John is his name,”
and all were amazed.
Immediately his mouth was opened, his tongue freed,
and he spoke blessing God.
Then fear came upon all their neighbors,
and all these matters were discussed
throughout the hill country of Judea.
All who heard these things took them to heart, saying,
“What, then, will this child be?”
For surely the hand of the Lord was with him.
The child grew and became strong in spirit,
and he was in the desert until the day
of his manifestation to Israel.
—

Prophets are a special breed of characters in the Bible. They are the human messengers of God to His people. Today, we celebrate the birth of St. John the Baptist. Luke’s Gospel portrays Mary as related to Elizabeth making Jesus and John “cousins” in the wide sense of the word. But our Gospel today does not dwell on their familial connection but on something that transcends bonds of blood.
John the Baptist is the herald of the Messiah, making him a prophet of the Incarnation of God. Luke wrote his Gospel drawing from Old Testament prophecies. The circumstances of his birth, the naming, and the anticipation of the child, all point to the role that John will take before Jesus begins His public ministry. What is beautiful about this story is the stress on blessing and hope.
If John were a blessing to his aged parents, he was to announce the great blessing that is to come for Israel. This blessing was brought about by Divine interventions seen in the marvels surrounding his birth but finds its climax in the pouring forth of God’s spirit on the child. He “grew and became strong in the spirit”. Like the dawn announcing the rising of the sun, the birth of John the Baptist was the prelude to joyful announcement of Jesus’ birth. Even in his birth, John points to Jesus, the Messiah, the God Incarnate, in whom the fullness of God’s Spirit dwells.

or my website at http://keithamodia.co.cc
Disclaimer: This section of the website is a personal creative writing of the author and does not necessarily reflect the official views, opinion, or policies of the Salesians of Don Bosco – Philippines South Province. For concerns on the content, style, and grammar of this piece, please contact us.