She who chose the Freedom of the Free 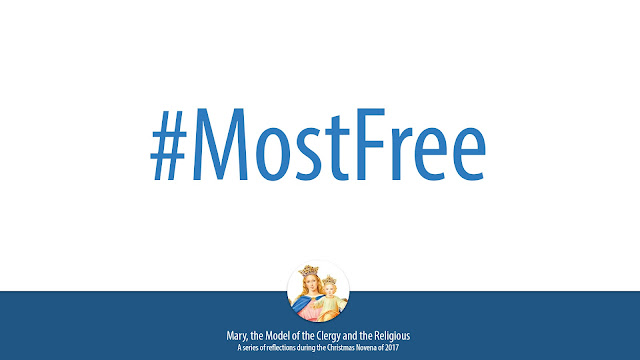 Thinkers describe our generation as a generation that exalts freedom. The preoccupation with civil liberties is the natural expression with the Enlightenment’s focus on the human person.The human person is free to decide for itself, to define and redefine itself. Freedom is what makes us human. It is the foundation of all our relationships since we choose to establish and terminate them at will.

Freedom, like all things human, has a limit. As it is a capacity to choose, it remains wanting. That capacity must be exercised in order for our freedom to be true and perfect. Here we see that while everyone has freedom, not everyone is free. It is our choice that determines how free we are. Choosing freely the best option, the good option, no matter how scary or difficult, is what makes a human person free.

Mary, the Virgin of Freedom

It is in the Annunciation that we first glimpse the great freedom that God gave Mary and the freedom that Mary exercised and perfected. To be the Mother of Redeemer is not an assignment that God gives and assigns to any woman. God offered it to the Virgin Mary. He did not command but through the angel Gabriel, He asked for her cooperation.

It was a difficult choice. Mary was already betrothed to Joseph. To conceive a child that is not Joseph’s before the marriage is consummated is tantamount to adultery. She risks her future, her honor, her family, and even her life. Despite the fear and the questions in her head, she did what many of us should do: she listened. She listened to the words of Gabriel and submitted to them. Exemplifying obedience for everyone, she gave her fiat, “Let it be done to me according to your Word.”

She gained true freedom when she surrendered her freedom to God. That was the great paradox of her choice and the great paradox that awaits us in front of God’s invitation. It was a surrender because she could have chosen otherwise, she could have played safe. Mary, however, knew that God is always the best option, the greatest option, no matter how scary or difficult circumstances might be. She knew such surrender can’t make her rich or famous. She knew that such surrender entails great pain and suffering. But even so, she surrendered her will and she was made free.

Freedom for the Christian

For Christians who live and move in the world everyday, it is a great challenge to speak of obedience. The world loves its freedom. It thinks that freedom lies in its capacity to choose. It is drunk in that kind of power. So the world seeks to expand its choices if only to avoid the best the one. Christians must rise to the challenge of being counter-cultural. Even since the beginning of Christianity, or even farther in the Annunciation, faith in Christ always meant surrender to God’s Will.