Should the Moon Shine More Brightly Than the Sun 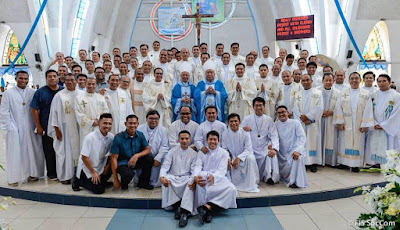 Religious people – priests, nuns, and brothers, are for the  most part people of privilege in Filipino culture. Not because of their own achievements but because of the identity they have taken for themselves. Religious are honored because they chose a life of service to the Church, a life that strives to be closer to Christ – two difficult endeavors in our society today. Besides that, their consecration to Christ marks them as a group Jesus Christ has taken for Himself. It is that acceptance of their self-donation by Christ through the public admission of the Church that religious are seen as “people close to God”.

It is both a privilege and a responsibility. It is not a right. It is a privilege because the vocation to serve is a gift. It is a responsibility because the religious share in the mission of Christ and the Church more closely. It is not a right, because what man has the right to claim God’s glory for himself? Religious people are like the moon that help govern the tides and seasons of earth but they are not the source of light and warmth. They accompany the earth in its dancing journey around Jesus, the sun and Son.

The big danger so far, as what Pope Francis has also pointed out in the past, is clericalism, or that sense of entitlement within the Church. Too many religious people fall into the trap. Pampered by people, admired by parishioners, listened to in talks and homilies, religious begin to think that they are the source of light. How many of us priests and religious feel proud when garnering more likes and shares in social media than the average person? How many of us priests and religious expect to be served and given special attention at social functions?

The privilege of attention, of focus, of a captured audience, was given to us because we are supposed to be heralds of the Gospel. The Gospel, Jesus Christ, takes the center stage of all our ministry. Our success in the ministry, the plans that we perfectly executed, the achievements we have garnered, our political beliefs and ideas should not eclipse our main mission of proclaiming Christ. For when the moon has eclipsed the sun, then we have defeated our self-donation to Christ and the Church.

For the ordinary Christian, stop praising priests because they are priests. They did nothing to deserve their priesthood and call it their own – it was Christ who chose them and not the other way around. The same goes for religious sisters and brothers. But rather, pray for them, assist them, encourage them, and help them become faithful in their ministry. In our society permeated by social media, the temptation to shine more brightly than the sun is stronger, our weak self-image and the need for affirmation trap us in an illusion of self-grandeur. Should the moon shine more brightly than the sun, remind it of its own proper place.