The Concreteness of Being Human 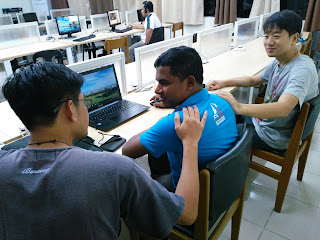 We all need to be touched and to touch. Psychological studies have shown that babies who do not experience touch in the first hours of their birth tend to develop emotional problems later on in life. As children we all feel the need to be cuddled by our parents. If something is wrong we need a shoulder to cry on. When we are discouraged we need someone to lean on. When victorious we need someone to tap our back. And even later in life, we need someone to hold hands with in joy or in sorrow, in sickness or in health, till death do us part.

This is so evident now in the era of technology. We used to wonder at the marvel of the television when we have created something that allowed us extend our power of vision. Now, technology is developing in such a way where it seeks to engage us more than our sight and our hearing. The field is called Haptics Technology where we engage our sense of touch and proprioception. While it has developed well over the years in user interfaces like the touch pad and the touch screen and with movement sensors in the Xbox and other game consoles, research and development among technology companies are now seeking ways to allow devices to give us what they called a haptic feedback.

Tech companies want their devices their to respond to their users through touch. This means a touch screen that vibrates upon tap. This means being immersed in an augmented or virtual reality where virtual objects are experienced through touch. Engineers are hard at work on creating pressure feedback whenever you interact with virtual objects. It’s like petting a virtual dog and you can physically feel its fur on your palms despite it a hologram.

Such movement in technology and science is a clear indicator that as human beings we beings of touch. We are also beings that are physically present in a physical world. This explains why we want our loved ones to be physically present during important events of life and why a phone call is still not enough to compensate. Such an experience is a gift of being a creature that is both body and spirit. Haptic experience, the sense of touch, is the gift of the physical bodies to us, something denied to spirits.

Perhaps one good lesson we can learn today is to really take advantage of our sense of touch. How many times do we hug our parents and our children in a day? Who among our friends need a pat on the back or a shoulder to cry on? I believe many hearts are waiting as they lie imprisoned in their own loneliness. All we need is to reach out and touch those hearts.

If the psalms would say that we have a higher dignity than angels, then having bodies is one of those advantages of being humans. It is time for us to let go of the idea that the soul is imprisoned inside the body. No, the soul is expressed through the body in the same way that the external world is experienced through the body. No wonder then that Christ gives us His body and blood in the Eucharist. It is in touch that we become concrete.