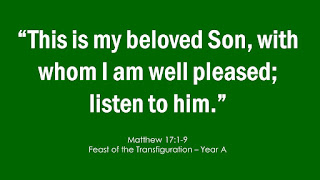 Holy Gospel of Jesus Christ according to Saint Matthew 17:1-9.
Jesus took Peter, James, and his brother, John,
and led them up a high mountain by themselves.
And he was transfigured before them;
his face shone like the sun
and his clothes became white as light.
And behold, Moses and Elijah appeared to them,
conversing with him.
Then Peter said to Jesus in reply,
“Lord, it is good that we are here.
If you wish, I will make three tents here,
one for you, one for Moses, and one for Elijah.”
While he was still speaking, behold,
a bright cloud cast a shadow over them,
then from the cloud came a voice that said,
“This is my beloved Son, with whom I am well pleased;
listen to him.”
When the disciples heard this, they fell prostrate
and were very much afraid.
But Jesus came and touched them, saying,
“Rise, and do not be afraid.”
And when the disciples raised their eyes,
they saw no one else but Jesus alone.

As they were coming down from the mountain,
Jesus charged them,
“Do not tell the vision to anyone
until the Son of Man has been raised from the dead.”

Reflection
Trailers have become a business of their own. Every new Hollywood flick out there must always have a trailer on YouTube. It’s part of the film promotion. Potential viewers get a glimpse of what the movie is about. This Sunday’s Transfiguration is what I call Jesus’ own trailer of what is to come.

First, Jesus brought a limited audience (think of limited previews for some films). The inner circle of Peter, James and John were the privileged ones among the twelve to scale up the mountain to witness the epiphany. These three were the first disciples to follow Christ and seems to be closest to Him. Jesus  has his best friends too. He brought them with Him not to show off His celestial powers. “Hey, guys, see what I can do!” No. They were chosen as witnesses because their faith had to be strengthened.

It was only in the previous chapter of Matthew that Peter expressed his faith in Jesus: “You are the Messiah, the Son of the living God.” (Mat 16:16 NRS) They were still beginning to fathom the significance of this statement and the shadow of the cross is getting nearer and nearer. When faced with the absurdity of the cross, these disciples have nothing to hold on to unless they truly know who Jesus is.

So they scaled up the mountain. Like Moses and his three companions: Aaron, Nadab and Abihu, Jesus and the three went up to meet God. In the Bible, the phrase ‘to go up’ usually hints of praying and worship because God’s epiphanies or manifestations are often associated with high places. But Peter, James and John would be dumbfounded to experience in a vision that God was them all long. “This is my Son, the Beloved; with him I am well pleased; listen to him!” (Mat 17:5 NRS)

While trailers and previews are all about the spectacle, the Transfiguration did not limit itself to wonder and awe. The three certainly were. Even Peter could not make sense out of it much more the words that he spoke. Jesus had to reveal to them His glorious form and the Father had to make His voice heard again for them to realize the hope of a future glory which is in the Person of Jesus Christ. Yet this hope does not come from visions or spectacle. It comes the most important part of the passage as the Father commands, “listen to him!”

The hope of the Resurrection which we find in Jesus only becomes ours if we listen to Him. It is a hope that we too will share in the glorious form revealed in the Transfiguration, that there is a reality that goes beyond the beauty and limits of this world. It is a hope accessed by faith in listening. Jesus knows too well that we need to be strengthened as we go through life, as we face our daily crosses. So He plants that hope in us to spur us on. Just like trailers, the Transfiguration previews the main attraction. More than that, it also allows us to already enter, and not just watch passively, the main feature: the life of Jesus Christ in us.