The Primacy of God and a Case for Hospitality 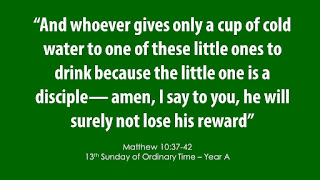 —
Reflection
Just before we were sent out to our respective weekend apostolate assignments, our formator-in-charge warned us: “Do not think that people come close to you and praise you and compliment you because you are handsome. No, they come to you because they see the goodness in you.” It was a fitting warning to a millenial generation of ministers who are fond of using social media and taking selfies. This generation after all is described as obsessively narcissistic. But I would say that people approach the ministers at the altar because they believe God is with them.

A Vietnamese priest who got recently ordained and who grew up with me in the theologate is unsettled at the lavish concern that Filipino Catholics give to priests. It is a point of teasing between us but it does show the Catholic culture we have in the Philippines. It is indeed unsettling for us who chose to serve at the altar since we very well know of our own weaknesses and how much we do not deserve the honor. Yet by faith, we accept it for by faith we believe that the devotion the People of God lavish on priests and ordained ministers are not to the persons themselves but to Christ.

It simply amazes me that the Spanish missionaries were able to inculcate in our society this instinct for Christ in the ministers. The danger these days however is to forget the faith that underlies the devotion. In fact, other sects deride Catholics for this seemingly unrealistic practice. Jesus in today’s Gospel invites His believers to a culture of hospitality for those He has sent. It is not about the person sent but the message that the apostle (apostolos in Greek means “sent”) bears for the Christian community. That is the reward for hospitality and devotion promised by the Lord.

The message or Good News is none other than Christ. So the reward for accepting the messenger into one’s home and one’s heart is certainly greater than that of the prophet or the righteous one. We ordained ministers bring Christ to the people of God. There is no proof for this other than our witnessing and preaching and only the eyes of faith can see Christ in the minister. The minister for his part has to believe this in a greater degree since the pull of doubts can sometimes douse the flame of the Gospel.

All in all, everything revolves around Christ and it is Christ who holds everything together. Thus our love for Him must transcend everything else even familial ties. For all other loves exist because of the Love of Christ. Only Christ gives meaning to everything.