Voices in the Desert 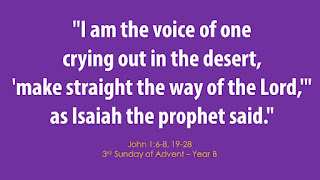 And this is the testimony of John.
When the Jews from Jerusalem sent priests
and Levites to him
to ask him, “Who are you?”
He admitted and did not deny it,
but admitted, “I am not the Christ.”
So they asked him,
“What are you then? Are you Elijah?”
And he said, “I am not.”
“Are you the Prophet?”
He answered, “No.”
So they said to him,
“Who are you, so we can give an answer to those who sent us?
What do you have to say for yourself?”
He said:
“I am the voice of one crying out in the desert,
‘make straight the way of the Lord,'”
as Isaiah the prophet said.”
Some Pharisees were also sent.
They asked him,
“Why then do you baptize
if you are not the Christ or Elijah or the Prophet?”
John answered them,
“I baptize with water;
but there is one among you whom you do not recognize,
the one who is coming after me,
whose sandal strap I am not worthy to untie.”
This happened in Bethany across the Jordan,
where John was baptizing.

Testimonials used to be the thing when MySpace was still around. The much needed psychological boost from positive feedbacking fed the trend. Today, Facebook’s ‘like’ and reactions replaced all that. Who among us would not delight at the number of likes our posts get on social media? Psychologists warn that this is the narcissistic trend today. We live in a world of self-promotion and self-aggrandizing.

What John claimed for himself is his rightful and honest place in the story of salvation. He is the voice of one crying out in the desert, “make straight the way of the Lord.” He is the herald that announces the coming of the Bridegroom. In his honesty, John reminded us what true humility is all about. Humility is honesty about who we are in front of Jesus.

While most of us put forward our best angle in our profile pictures and spend minutes thinking about lines that catch attention in our posts, this Sunday of Advent reminds us of our dignity and role as Christians. We too are voices crying out in the desert. We cry out to lobby for a world ready to accept its King. How can we make straight the way of the Lord today in our hearts, homes, and communities?