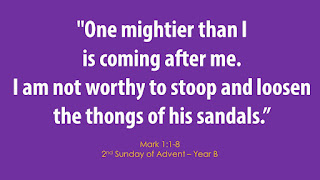 As it is written in Isaiah the prophet:
Behold, I am sending my messenger ahead of you;
he will prepare your way.
A voice of one crying out in the desert:
“Prepare the way of the Lord,
make straight his paths.”
John the Baptist appeared in the desert
proclaiming a baptism of repentance for the forgiveness of sins.
People of the whole Judean countryside
and all the inhabitants of Jerusalem
were going out to him
and were being baptized by him in the Jordan River
as they acknowledged their sins.
John was clothed in camel’s hair,
with a leather belt around his waist.
He fed on locusts and wild honey.
And this is what he proclaimed:
“One mightier than I is coming after me.
I am not worthy to stoop and loosen the thongs of his sandals.
I have baptized you with water;
he will baptize you with the Holy Spirit.”

St. John the Baptist is the Biblical prototype of the hyperlink. Those texts on the web that you click/tap in order to follow up on some information were called hyperlinks by the founding engineers of the internet and web. They link pages together allowing us to jump from one page to another. The name is cool because it really is a hyper jump. Unknowingly, as you follow through those links, you are interacting with webpages hosted in the USA, then Europe, then Africa, then China… You get the point. These links hold the web together.

John the Baptist reminds us to be hyperlinks today inasmuch as he was to Jesus. Fulfilling the prophecy of Isaiah, he prepared Israel for the coming of the Messiah by his preaching of repentance. He was not the message nor the Word. He was the hyperlink to the Word. He led people to believe in Jesus. He attracted people and forwarded them to Jesus. He was the introduction, Jesus is the core message.

Jesus, after all, is the fulfillment of the Scriptures. His baptism is the Baptism of the Spirit that fulfills what was begun by John’s baptism of water. This Fulfillment comes with a prelude that does not promote himself but humbly points out the coming of his Master. Do we as Catholic Christians point out the coming of Jesus by our life-witnessing? When people hover around us can they see us pointing to Jesus? As Jesus’ birth is coming, we deepen our shared role with St. John the Baptist.