Why We Eat Jesus in the Mass 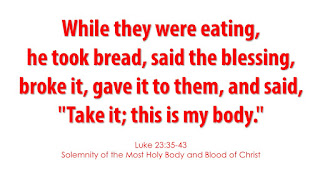 Holy Gospel of Jesus Christ according to Saint Mark 14:12-16, 22-26.
On the first day of the Feast of Unleavened Bread,
when they sacrificed the Passover lamb,
Jesus’ disciples said to him,
“Where do you want us to go
and prepare for you to eat the Passover?”
He sent two of his disciples and said to them,
“Go into the city and a man will meet you,
carrying a jar of water.
Follow him.
Wherever he enters, say to the master of the house,
‘The Teacher says, “Where is my guest room
where I may eat the Passover with my disciples?”‘
Then he will show you a large upper room furnished and ready.
Make the preparations for us there.”
The disciples then went off, entered the city,
and found it just as he had told them;
and they prepared the Passover.
While they were eating,
he took bread, said the blessing,
broke it, gave it to them, and said,
“Take it; this is my body.”
Then he took a cup, gave thanks, and gave it to them,
and they all drank from it.
He said to them,
“This is my blood of the covenant,
which will be shed for many.
Amen, I say to you,
I shall not drink again the fruit of the vine
until the day when I drink it new in the kingdom of God.”
Then, after singing a hymn,
they went out to the Mount of Olives.

Continuing the tradition of the first Christians, we Catholics gather once a week to celebrate the “breaking of the bread”, the ritual we celebrate every Sunday which commemorates Jesus’ last supper which He commanded to “do this in memory of me.” Such a ritual is so pronounced and is deemed important in the Church that it is recorded in Matthew, Mark, and Luke, given a long theological discourse by John (chapters 13-17), and taught by Paul in his missions. This ritual is the Holy Mass.

The significance of this ritual is rooted in the Jewish ritual sacrifice. The Jews worship God by offering gifts in the Temple. Except for the burnt offering, all other offerings are either eaten by the priest or by the one offering after they have been offered in the altar. Such offerings are a recognition of God’s power, a prayer for forgiveness, or a prayer of thanksgiving. Jesus, however, in His institution of the Eucharist, replaced these with one single offering that supersedes all others. The ritual that He performed together with His disciples, while having Jewish roots have taken novel elements.

This sets apart the Christian ritual of the Holy Mass. In the Mass, we do not offer anything to God other than Jesus Himself who said, “this is my body… this is my blood…” The other offerings that we have given during the offertory are but expressions of Christian charity for the Church and the poor. Only Jesus is the offering, strictly speaking, inside the celebration of the Holy Mass. Anything that we offer, taken from the earth, could not satisfy the majesty of God. Jesus is the perfect offering because He is the Father’s “beloved Son in whom I am well pleased.”

This Sunday’s celebration then is about Jesus’ offering of Himself on the altar. No longer carcasses of animals, but the very Body and Blood of the Son is offered on the altar to the Father. And after being raised up on high and acclaimed by the people with the great “Amen!”, the Christian community partakes of the offering in communion. We literally eat Jesus, who by force of His Word spoken by the instrument of the priest’s person, has turned the bread and wine into His Flesh and Blood, so that in doing so, we become part of His Body and nourished by His Blood.