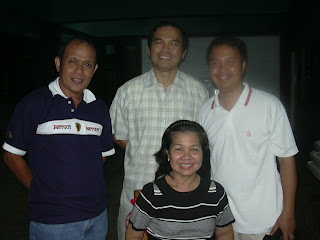 When I saw Lori Rago standing straight,, unaided by a walking stick, attending the usual Tuesday evening adoration of their prayer group in our small chapel in Don Bosco, I was both amazed and amused at the power of prayer. As I approached her walking towards the car accompanied by her husband Nonong, she gave me a delighted grin like one who had just won the coveted million-peso prize of a sweepstakes lottery. Her eyes were twinkling with joy like a mother staring at her firstborn in her arms. She easily recognized me and we got to talk. I told her: “You are a walking miracle!’

How else could I describe what wonders the Lord has done for her?

It all started with a doctor’s startling diagnosis that she had to undergo open heart surgery because her heart was not functioning one hundred percent. This happened last March, several days before Holy Week. What was supposed to be a quick fix heart operation turned out to be a nightmare for her and the whole family. After an-8hour surgery, she fell into a coma. Her limbs could not move; her eyes were closed and no sensation could be felt in her whole body. The CT scan revealed that foreign bodies from the heart had clogged up in the nerve cells of her brain causing severe brain damage. The neurologist told her husband she would not wake up anymore because the damage was irreparable and that she would lose her skills in language, communication, comprehension and understanding. The best scenario was that she would survive but stay comatose. The worst scenario is, she would die.

“Let’s just pray for a miracle,” said the doctor. “I still believe in miracles.”

The doctors gave here one week to gain consciousness. But when the deadline was over she showed no sign of awakening. She was a veritable vegetable at the Cardio Vascular Unit (CVU) with lots of tubes in different parts of her body. Lori Rago, the 56-year old HR consultant of several companies here in Cebu and an active lay mission partner of the Salesians in the South, would stay in this morbid state at the Chong Hua Hospital for almost two weeks. She was breathing aided by a respirator that somehow kept her alive.

A miracle was the only hope for other hopes were lost. And pray, her husband did. For Nonong, prayer was his last recourse. Never did he pray so hard as in those times. He was not alone, though, in praying for Lori’s cure. Many friends and acquaintances supported the family during those agonizing moments especially when text messages circulated that she was at the rope’s end. Prayers went up to the Lord and the intercession of different saintly people were invoked particularly Our Blessed Mother, Blessed Pedro Calungsod, Blessed Artemide Zatti and even John Paul II.

A decision was reached to remove the respirator. This decision caused the family tremendous pain because they were told that in so doing, she would only have a maximum of four hours to live. She was given the last rite and each member of the family bid her goodbye with a heavy heart. But when the respirator was removed, behold; she continued breathing! In fact, her breathing normalized and after three days she regained consciousness. While reciting the rosary at her bedside, they heard her pray with them the “Our Father.” She also astonished the family when she joined the singing of “Birhen sa Lourdes” from the CD they used to play for her in the room. The family brought her home and her development continued to be a surprise.

Today, Lori is on her way to full recovery. She walks, she talks and she continues to give her exuberant smile. When I asked her how she feels about her extraordinary experience, she simply says that she is grateful to the Lord for her amazing recovery. She has also returned to attend the Tuesday afternoon of Salesianity sessions at the DB-CLAY (Don Bosco-Center for Lay Adult and Youth) at Lawaan where she acts as Managing Director.

Miracles continue to happen and faith in the triune God makes this possible. While faith makes us move mountains; miracles can strengthen our weak faith. In our life we need not look for extraordinary miracles constantly to convince us of God’s powerful presence. There are many ordinary miracles we simply overlook.

As we wake up each morning we experience the miracle of awakening; as we walk and talk and play, these are miracles of being that celebrate our existence. In making decisions, in thinking and reflecting these are miracles of rationality that give birth to our humanity. And the greatest ordinary miracle of all is the fact that we can be in union with the Divine Being Himself in prayer. Our capacity to be close to God makes each of us a walking miracle.