by Randy Figuracion
This essay brought me to tears as I tried to know more about DILG Secretary Jesse Robredo. I read it in Rappler.com. It was written by her daughter Jessica Marie ‘Aika” Robredo when she was a 15-year old high school student at the Universidad de Sta. Isabel in Naga City. This essay won the grand prize for the high school category of the Ramon Magsaysay Student Essay Competition in 2003. This is truly inspiring – Sec. Jesse Robredo was really a man who made a difference for Bicol and this country.
I was only 12 years old in August 2000 when Jesse Manalastas Robredo was proclaimed as the recipient of the Ramon Magsaysay Award for Government Service. I was a witness to how honored the man felt with the recognition given to him. But it was not until I was asked by my English teacher to go over the list of past and present Ramon Magsaysay awardees and write an essay on one of them that I was able to fully understand the great significance of the award. The awardees, I quickly learned, were exceptional men and women who bravely dared to make a difference in making Asia, and maybe the world, a better place. 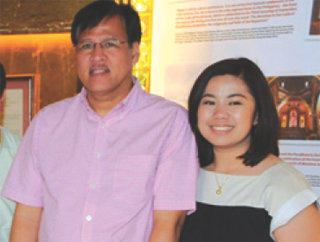 It was easy for me to pick Jesse Robredo from the list of 229 awardees because he was one person who truly inspired me, and who continues to inspire me to make a difference. To write about his life and his work, however, is a very daunting task, because he is very close to my heart.
Much has been written about his outstanding work as mayor of Naga City from 1988 to 1998 and how he bravely fought corruption, vice, poverty, economic stagnation and dramatically transformed Naga from an inefficient and dispirited city into one of the most progressive in the country. When the euphoria brought about by the Edsa People Power Revolution started to wane and people were starting to doubt if a more authoritarian leadership would work better for the Filipino people, Robredo showed us all that the people are still the most important resource and restored our faith in democracy. He not only worked for the poor but worked with them and involved them every step of the way. He has always pushed for growth with equity, transparency, integrity and he brought honor to his office. But the most essential part of his accomplishments are those that are invisible to the naked eye.
I am 15, but I must admit that to this day, the lessons of democracy, of fiscal management, of people empowerment, are still quite difficult for me to comprehend. What I do understand is that the people of Naga look up to him because he succeeded in making them feel he is just like any one of them. He is simple and humble in his ways. He wears the city government uniform to work. He is in his office before eight o’clock in the morning. He goes around without bodyguards, and he does not believe he is entitled to special perks just because of his office. He lives very modestly as his house and office would reveal.
He is a very dedicated public servant and practices what he preaches. No task is ever too menial for him, whether it is driving around the city at night to check busted lampposts or joining street cleaners and garbage collectors in performing their regular chores.
People see the best in him during the worst of times. He is always the last man on the street during typhoons, making sure that people are safe, and the first one to shovel the mud out of the city after the floods.
In 1998, after serving his third consecutive term as mayor of the city, he stepped down quietly, ignoring suggestions for him to seek higher office or perpetuate himself in power by asking a family member to run in his stead.
Now that I know what the Ramon Magsaysay Award is all about, I feel truly blessed that I happen to be his daughter. I was born exactly six days before he was first elected mayor and I spent the first 10 years of my life with him at City Hall.
If there was one thing that convinced me that he is truly deserving of the award, it is this: He has never made me feel I was different from others just because he is my father. As he goes about serving others, I have never been left wanting for his time and attention. He eats lunch and dinner with us seven days a week, even if it means he has to take two or three more meals because he has to attend a constituent’s wedding or birthday reception. No occasion is too trivial for him. He is there for us not only during PTA meetings or piano or ballet recitals, but even when my math homework gets a little too difficult.
Now that I am a little older, sometimes people would come up to me to tell me what great things my father has done for them. I feel proud. But what puts a smile in my heart is knowing that he also did small things for some people – things like bringing back a wayward son to his distraught mother, helping a male employee patch things up with his wife, or playing basketball on a street corner with the neighborhood kids. Such things may appear inconsequential, but they have brought great joy to others and made them feel important.
His decision to continue serving his native city and resist the lure of national prominence, which a higher elective post could have brought him, had the deepest impact on me and imparted to me life-long lessons: that no deed is too small nor too big if it makes other people’s burden lighter and their lives better; that greatness of spirit can be achieved not through wealth, power or popularity, but by living your life with quiet dignity and by becoming a man for others. By his example, I have been truly inspired to dare to make a difference, break ground, stand up for my own convictions and serve others selflessly and with integrity in whatever field I will find myself in.  (Source: Rappler.com)