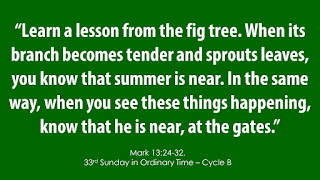 Holy Gospel of Jesus Christ according to Saint Mark 13:24-32.

Jesus said to his disciples:
“In those days after that tribulation
the sun will be darkened,
and the moon will not give its light,
and the stars will be falling from the sky,
and the powers in the heavens will be shaken.

“And then they will see ‘the Son of Man coming in the clouds’
with great power and glory,
and then he will send out the angels
and gather his elect from the four winds,
from the end of the earth to the end of the sky.

“But of that day or hour, no one knows,
neither the angels in heaven, nor the Son, but only the Father.”

The end is always something that snaps us back to the reality of how fleeting life is. Our Sunday Gospel reading reminds us of the end of days which marks the transformation of the old order into the order of the Son of Man. What was old is totally transfigured into something new, reconfigured to the design of the Word who does not change, who remains faithful, and whose words will not pass away.

Jesus invites us to be sensitive to the signs of the times. The very seasons of life will tell us the proximity of the new age. Its coming is totally veiled in mystery – only the Father knows the time, if only to humble us that no human foreknowledge could grasp the final fulfillment of God’s design. We are humbled in our ignorance but also spurred to always keep watch and be ready for the end.

The predictions of change that are celestial in proportion may sound scary but they speak of the magnitude of the change that God is about to bring. However, the Gospel also reminds us that such change is not abrupt. It has already begun. It began in when the Word became flesh, and continues as all that is flesh is reunited to the Word. The celestial changes should be foreshadowed by how much we ourselves are changing and preparing to receive our end, who is the Word, Jesus Christ.