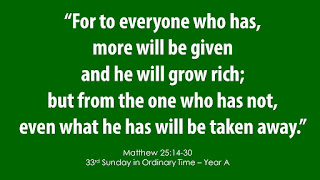 Holy Gospel of Jesus Christ according to Saint Matthew 25:14-30.
Jesus told his disciples this parable:
“A man going on a journey
called in his servants and entrusted his possessions to them.
To one he gave five talents; to another, two; to a third, one–
to each according to his ability.
Then he went away.
Immediately the one who received five talents went and traded with them,
and made another five.
Likewise, the one who received two made another two.
But the man who received one went off and dug a hole in the ground
and buried his master’s money.

Reflection
Jesus parable this Sunday is easily understood in different times and periods of history. It is a common thing for any society when a person entrusts his property to others. For us today, we see this in investors and stock market capitalists who pour in their cash to earn more or in simple households who keep their savings in the bank expecting an interest from the time deposit. What is baffling in the parable however is the small detail that the master never gave an explicit instruction to his servants to invest the talents he has given them. As the story tells it, it seems it was left to the servants to interpret the gesture.

God has entrusted to us so much. The gift of our persons, who we are, is a gift that long desires to be opened, unwrapped, and explored. Despite the years, we still surprise ourselves of the hidden treasures God has hidden inside each of us. The gift of family and friends, of community, and of the Church also reveals to us God’s unending providence. The gift of nature and creation reminds us how artistic God is. All of these are the talents that we have received.

Like the servants in the parable, we are stewards of the talents we have received. We might differ in abilities but God left it to us how to interpret His gesture of gratuitousness. It takes prayer and entering into the mind of God to understand His intentions for us. The return of the master poses one question: “what have we done to the gifts and talents we have received?” The last detail in the parable puts the investment into perspective. While the master did expect that his properties will grow at the hands of the servants, he never took them back but allowed the servants to keep the principal plus the interest and even more. God does not see us as production machines. Rather, He gives gifts that we might grow rich in them, and at the end of this age, share in the fullness of His joy.