At first it was unthinkable, unconquerable, and impossible. It was like facing giants and legions of soldiers charging at you. I thought I could not do it. I thought wrong.

I have to admit, I was shaken at the thought of going back to Canlubang alone. Passing through the Manila metropolis, along the tangled mesh of roads, passes, and streets that seem to have captured in its web the many tall and imposing buildings in whose feet the populace walk to and fro, all breathing the undeniably toxic atmosphere of city smog. I’m a lonely boy from the province of Cebu (which by the way is a metropolis too, but much less complicated) who thought it too much to wade through the sea of people, people he doesn’t know, people who might hold him up, people who might just suddenly jump on him anytime, biding their time… 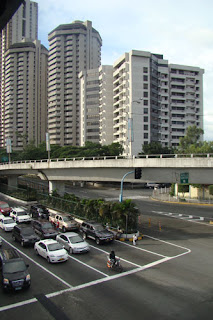 Ahh… the imagination of a cowardly, chaining an adventurous heart! But I was also on the challenge. Some people know that Keith Amodia has a side that befits a room in an intense psychiatric ward. With that side challenged, no once can stop it. I wasn’t really conscious of what I was doing. My hand automatically took my backpack. My legs walked on their own. I was entranced by the urban adventure.

It wasn’t scary afterall! I felt so free and independent walking the business avenue of Makati. The thrill of getting lost in the city made my heart beat faster. Adrenaline kept me at my guard against the elementals of the city… too much adrenaline, I was getting paranoid. I was simply high on the experience I did not feel the distance of the long walk.

I took the bus. I jumped on one when I saw its signboard shouting “Calamba”. It was a lucky coincidence. It fit perfectly on my ideal adventure of taking a ride the way ordinary people do. The bus wasn’t airconditioned. It was crammed with ordinary people. I was ordinary once more. I have been going around Manila in a private van for too long. I felt one with the ordinary people around me. It felt good experiencing the traffic, the  sights, the stops and go’s, and the wind that carries with it the smell of a motor engine. Discomfort! what a comfort!

When my feet touched down Mayapa, I felt fulfilled. I did a journey I thought was impossible. I had the courage to face the scare, and it wasn’t so scary after all. I did it! I did it! It was an adventure. Now I have to continue it.