Open to Surprises and Gifts 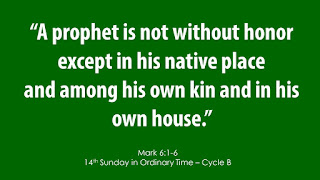 Holy Gospel of Jesus Christ according to Saint Mark 6:1-6.
Jesus departed from there and came to his native place, accompanied by his disciples.
When the sabbath came he began to teach in the synagogue,
and many who heard him were astonished.
They said, “Where did this man get all this?
What kind of wisdom has been given him?
What mighty deeds are wrought by his hands!
Is he not the carpenter, the son of Mary,
and the brother of James and Joses and Judas and Simon?
And are not his sisters here with us?”
And they took offense at him.
Jesus said to them,
“A prophet is not without honor except in his native place
and among his own kin and in his own house.”
So he was not able to perform any mighty deed there,
apart from curing a few sick people by laying his hands on them.
He was amazed at their lack of faith.
—

Jesus’ statement, “A prophet is not without honor except in his native place and among his own kin and in his own house,” is one of the most famous and quoted. Working prophetic signs and uttering prophetic words, Jesus is amazed at the lack of faith from His own people, the very people who knew Him most. They thought they knew Him as He grew up in their midst, but the wonders that Jesus was doing and saying simply broke through their calcified image of their neighbor. They could not take that Jesus was breaking through their preconceived ideas of Him.

Perhaps, the people from Jesus’ town were already comfortable with their images of their neighbors that anyone who tries to go beyond the comfortable levels are looked upon with suspicion. Even with Jesus’ miracles they then refused to believe. Their lack of openness led to a lack of faith.

Many of us fall into the same mistake of putting people into our own mental boxes and labelling them, stacking them up in our garage of biases. We even fall into the mistake of putting God into a box and expecting Him to act according to our own image of Him. But people and God are mysteries who will always challenge our measures. Persons, both our neighbors and God, are gifts that we continually peel-off layers of wonders. Our Gospel reminds us today to be open: open to people, open to God, and open to surprises.