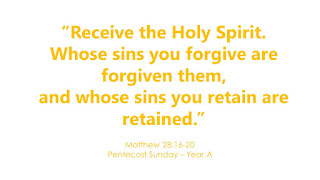 Not many notice it but the New Testament has two accounts of how the Holy Spirit was given to the disciples at Pentecost. In our first reading, Luke writes that the Spirit burst into the room where the disciples were gathered. There appeared to them the tongues of fire which rested on each one of them. In the Gospel, John writes that Jesus himself burst into the room where the disciples locked themselves in out of fear. Jesus quelled their fears with the greeting “Peace be with you.” And, in order to recall the events of creation, John writes that Jesus breathed on them.

The Holy Spirit is breath and fire.

He is breath because he is the Lord of life. In the events of creation, the Spirit was moving and breathing over the primordial waters in order to bring forth creation in the midst of chaos. In the creation of man, God breathed on the clay that Adam may have life. In the same way, Jesus breathes on the community of disciples that they may have new life.

Everything consumed by the fire of the Spirit is changed and renewed. The Christians who were hiding inside the house now boldly speaks in public. They speak in powerful language that the division of language is healed. The visiting nationalities in Jerusalem could understand them! Sin, in the biblical mind, is division. Jesus, in the Gospel of John, gives the Spirit in order to forgive sin, that is, to unite.

St. Paul poetically describes the action of the Spirit in the lives of the believers. Inspired and set fire by the Spirit many of them were moved to preach and do the works of the Gospel. There was the outpouring of spiritual gifts. The Spirit moves the members because they are part of the one body. The flame and breath of life is animating the body of Christ, the Church. He does this without discrimination but instead forges unity in the manifold beauty of the ministries.

The Spirit is the renewal of all creation. He renews each individual with his gifts. He animates and unites the community in love.

Mass during the Day

When the time for Pentecost was fulfilled,

they were all in one place together.

And suddenly there came from the sky

and it filled the entire house in which they were.

Then there appeared to them tongues as of fire,

which parted and came to rest on each one of them.

And they were all filled with the Holy Spirit

and began to speak in different tongues,

as the Spirit enabled them to proclaim.

Now there were devout Jews from every nation under heaven staying in Jerusalem.

At this sound, they gathered in a large crowd,

but they were confused

because each one heard them speaking in his own language.

They were astounded, and in amazement they asked,

“Are not all these people who are speaking Galileans?

Then how does each of us hear them in his native language?

We are Parthians, Medes, and Elamites,

inhabitants of Mesopotamia, Judea and Cappadocia,

Pontus and Asia, Phrygia and Pamphylia,

Egypt and the districts of Libya near Cyrene,

as well as travelers from Rome,

both Jews and converts to Judaism, Cretans and Arabs,

yet we hear them speaking in our own tongues

of the mighty acts of God.”

Bless the LORD, O my soul!

O LORD, my God, you are great indeed!

How manifold are your works, O Lord!

the earth is full of your creatures;

May the glory of the LORD endure forever;

may the LORD be glad in his works!

Pleasing to him be my theme;

I will be glad in the LORD.

If you take away their breath, they perish

and return to their dust.

When you send forth your spirit, they are created,

and you renew the face of the earth.

No one can say, “Jesus is Lord,” except by the Holy Spirit.

There are different kinds of spiritual gifts but the same Spirit;

there are different forms of service but the same Lord;

there are different workings but the same God

who produces all of them in everyone.

To each individual the manifestation of the Spirit

is given for some benefit.

As a body is one though it has many parts,

and all the parts of the body, though many, are one body,

For in one Spirit we were all baptized into one body,

whether Jews or Greeks, slaves or free persons,

and we were all given to drink of one Spirit.

Holy Gospel of Jesus Christ according to Saint Matthew 28:16-20.

On the evening of that first day of the week,

when the doors were locked, where the disciples were,

for fear of the Jews,

Jesus came and stood in their midst

and said to them, “Peace be with you.”

When he had said this, he showed them his hands and his side.

The disciples rejoiced when they saw the Lord.

Jesus said to them again, “Peace be with you.

As the Father has sent me, so I send you.”

And when he had said this, he breathed on them and said to them,

Whose sins you forgive are forgiven them,

and whose sins you retain are retained.”

Disclaimer: This section of the website is a personal creative writing of the author and does not necessarily reflect the official views, opinion, or policies of the Salesians of Don Bosco – Philippines South Province. For concerns on the content, style, and grammar of this piece, please contact us.