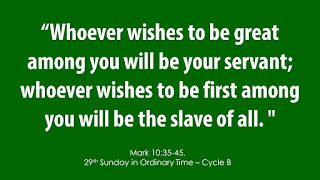 Holy Gospel of Jesus Christ according to Saint Mark 10:35-45.
James and John, the sons of Zebedee, came to Jesus and said to him,
“Teacher, we want you to do for us whatever we ask of you.”
He replied, “What do you wish me to do for you?”
They answered him, “Grant that in your glory
we may sit one at your right and the other at your left.”
Jesus said to them, “You do not know what you are asking.
Can you drink the cup that I drink
or be baptized with the baptism with which I am baptized?”
They said to him, “We can.”
Jesus said to them, “The cup that I drink, you will drink,
and with the baptism with which I am baptized, you will be baptized;
but to sit at my right or at my left is not mine to give
but is for those for whom it has been prepared.”
When the ten heard this, they became indignant at James and John.
Jesus summoned them and said to them,
“You know that those who are recognized as rulers over the Gentiles
lord it over them,
and their great ones make their authority over them felt.
But it shall not be so among you.
Rather, whoever wishes to be great among you will be your servant;
whoever wishes to be first among you will be the slave of all.
For the Son of Man did not come to be served
but to serve and to give his life as a ransom for many.”
—

Jesus continues to overturn ideas about the Kingdom. “It shall not be so among you.” He contrasts the way Gentiles exercise authority with the ideals of the Kingdom. How is authority exercised in the Kingdom of God? We look to Jesus who incarnates these ideals: “for the Son of Man did not come to be served but to serve and to give his life as a ransom for many.”

The Kingdom is hierarchical not by way of merit or power, but rather in the level of service offered to other people. Here we have a service of authority, where authority is exercised with the primary aim of serving others. This giving of one’s self in service is the hallmark of the Kingdom and exemplified by Jesus on the cross. It is not only an example but also an invitation, even a plea, that in the Christian community each member is at the service of all.

While people admire power and honor, Christians are to exemplify service and self-giving. This is how the Kingdom contrasts the world we live today.