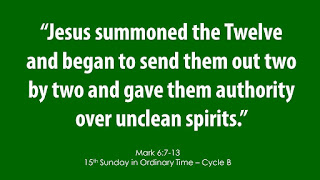 Holy Gospel of Jesus Christ according to Saint Mark 6:7-13.
Jesus summoned the Twelve and began to send them out two by two
and gave them authority over unclean spirits.
He instructed them to take nothing for the journey
but a walking stick—
no food, no sack, no money in their belts.
They were, however, to wear sandals
but not a second tunic.
He said to them,
“Wherever you enter a house, stay there until you leave.
Whatever place does not welcome you or listen to you,
leave there and shake the dust off your feet
in testimony against them.”
So they went off and preached repentance.
The Twelve drove out many demons,
and they anointed with oil many who were sick and cured them.
—

In Jesus company of disciples, a smaller group of twelve have always earned the reverence of the rest. Here mentioned as the “Twelve”, they were summoned and sent out by Jesus two-by-two in order to share in His ministry. Jesus was a leader who delegates that the task of spreading the Kingdom of God might benefit from the concerted efforts of many. This is not a sample case of the multiplier effect, however, but the summary of Christian life.

We all have been summoned to Jesus side. From our baptism to our Sunday celebrations of the Holy Mass, we are summoned time and time again to renew our relationship with Him, to receive instruction from Him, so as to share in His authority. Ours is not a mission, but a co-mission. We are summoned to Jesus, and share in Jesus, so that we may spread Jesus.

The idea of repentance is not limited to being sorry for one’s sins. In its original Greek meaning, it refers to a change of heart, and mind, and personhood. The Twelve were sent to preach repentance: of spreading Jesus’ words and works so that those who receive them may become more and more like Jesus. This constitutes Christian life. We become more and more like Christ, by answering His summons, listening to His words, and sharing in His works.